As the immediate past president and longtime volunteer for the Inman Page Black Alumni Council, Eldridge H. Gilbert III has harnessed the power of alumni volunteers to welcome the newest generation of Brunonians. 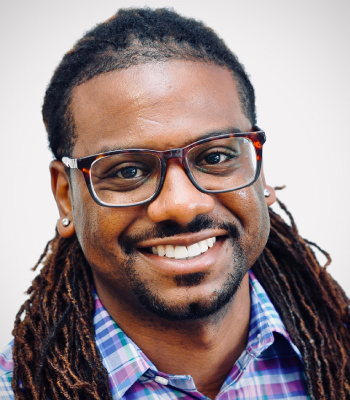 Eldridge H. Gilbert III ’05 is a teacher, so he knows firsthand the critical role that academic institutions can play in a young person’s life. With his work as a Brown volunteer, he’s hoping to help the next generation of Brown alumni find their way to College Hill.

Gilbert has been a volunteer for the Inman Page Black Alumni Council (IPC) since he graduated and has been one of the driving forces behind the council’s Black student matriculation campaign. This volunteer-driven effort is increasing the diversity in Brown’s incoming classes by fostering relationships between alumni and students who have been accepted to the University. In recognition of his leadership and dedication, Gilbert was honored with the 2022 Joseph M. Fernandez ’85 Award, which is given each year to celebrate service to the University community that brings diverse alumni together.

A longtime Brown volunteer, Gilbert notes that his service has been mutually beneficial.

“Volunteering has helped to expand my network and grow the types of experiences I've had,” he says. “I know without being involved in IPC and working with the Brown Club of New York, I would not have met so many dynamic people from Brown nor would I have known the greatness of some alumni of color and their work.”

At Brown, Gilbert concentrated in Africana studies and psychology before joining the Teach for America program in Houston, Texas after graduation. He then became the founding school principal of YES Prep North Forest, and later put his educational expertise to use by overseeing and advising other principals as the managing director for KIPP Bay Area public schools. Today, he continues to inspire other leaders and educators as the chief schools officer for Coney Island Prep and is a sought-after leadership coach.

Why do you continue to give back by volunteering as an alum?

I give back to Brown because it has given so much to me. I owe much of who I am — my beliefs, convictions, and close relationships — to my time at Brown. It was a journey of self-discovery in which I learned about the complexities of people and problems throughout the world, and it helped me understand how I wanted to relate to and address those issues.

What is one of your best memories from your time on campus?

I think my favorite memory from Brown was co-leading my final TWTP (Third World Transition Program), a pre-orientation program for incoming first-year students of color. I had the opportunity to lead it with someone who is still a very close friend, along with other Brown students of color. TWTP and its programming embodied all of my beliefs around equity and social justice so successfully that leading the program was extra fulfilling. I had also just gotten my appendix removed, so it was a fun physical experience, too!

What do you hope for other alumni who volunteer?

I hope that other alumni who volunteer are able to build new relationships and gain perspectives about the world and others from their involvement in the alumni community. I hope that they get a feeling of fulfillment and joy from positively contributing to Brown and to the growing alumni community.

Who are this year’s alumni award recipients?

Find out more about this year’s honorees, the awards, and previous recipients.

The vision and generosity behind Brown’s new LGBTQ+ Center

January 24, 2023
From Rhode Island to Texas to Guatemala, one thing remains constant for Martinez: his conviction to give back to those around him.
Read Article
Alumni & Friends

50 Years of "A Humanistic Approach to Medicine"

January 17, 2023
As The Warren Alpert Medical School marks a historic milestone, we examine the many ways that its students, alumni, and professors bring the School’s deeply held values to life—and what this shared commitment means for the future.
Read Article