From scalpels to screenplays: one student’s story of academic exploration 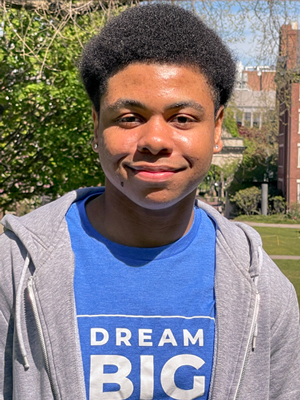 It’s Friday morning and Teidrick J. Banks ’25 has quite the day ahead of him. First up is organic chemistry class. After that, he jets over to his macroeconomics class. As soon as that’s over, he’s meeting up with some friends at The Ratty where they chat about the campus clubs and groups they’re part of — and also dissect the latest Marvel movie. Then, he’s on to a playwriting workshop to cap off the day.

It’s a typical Friday for Banks, and one he knows would be atypical anywhere but Brown.

“The variety of classes, student groups, organizations, and activities at Brown is mind-boggling,” he says. “The best part is that you’re really encouraged to explore everything and anything. Whatever it takes to find yourself.”

The freedom to explore, anchored by the Open Curriculum, is what first drew Banks to Brown. An economics and pre-med concentrator, he sought a college experience that nurtured his curiosity and didn’t restrict him to a single academic path.

Pursuing a career in medicine has been on his mind since he was 14 years old when he first saw the Marvel film “Dr. Strange.” It wasn’t the character's abilities as a master of the mystic arts that inspired him, but rather his abilities as a neurosurgeon.

“I remember watching the opening scenes where he’s performing surgery to remove a bullet from a patient’s brain. I was just in awe and left the theater thinking, ‘That’s what I want to do,’” he says.

Despite his affinity for neurosurgery, Banks isn’t pigeonholing himself into one career track just yet. He’s open to other medical fields, including dermatology, and even discovering how his economics concentration could somehow play a role. He’s also been nurturing one of his biggest hobbies: writing.

“I’ve been doing creative writing since I was in first grade, but it wasn’t until my first semester at Brown that I finally was able to take a writing course,” he says. “It’s probably my favorite class I’ve had here so far. It really motivated me to get involved with groups like Write It Brown and the St. Anthony Hall literary society.”

He’s not sure how he’ll use his degree, but the flexibility and freedom he’s had at Brown is letting him discover that on his own.

“I’m an economics concentrator, but I’m also on the pre-med track and I love writing. There might be other schools out there that would let me do all of this, but I think Brown is the only place I could do it successfully,” he says.

Setting students up for success

Providing a rich collection of resources and support is a crucial part of that success. Brown has gone to great lengths to not only create an ecosystem rich in both, but to make sure students know about and are connected to all that’s available to them.

One on-campus entity that’s helping students like Banks is the U-FLi (Undocumented, First-Generation College, and Low-Income Student) Center and its FLi Scholars Program. Also known as FLiSP, this year-long program helps first-year students adjust to college with individualized advising, understanding of campus resources, and a support system of peers and staff.

“Coming to Brown, it was like night and day from what I had at my high school,” he says. “There’s just so much here; it was definitely important to learn what’s available to me and get acquainted with the campus community.”

FLiSP wasn’t the only inroad for Banks to engage with the Brown community. He’s also a recipient of the Inman Page Black Alumni Council (IPC) Brown Annual Fund Scholarship, an alumni-driven scholarship that provides financial aid for Black students at Brown. Through the scholarship and its community of supporters, Banks was introduced to the Brown Center for Students of Color and began connecting with the Black community on campus.

His scholarship did more than introduce him to the Brown community: it made his college education possible.

“I don’t think I would have been able to go to college without Brown’s financial aid,” he says. “With the other schools, I received all of the scholarships they provided, and I still couldn’t afford it. I would have gone straight into the workforce after high school.”

For Banks, the possibilities of what could have been were further crystalized in one of his recent economics classes where they discussed the stark contrast in income levels between those with a college degree and those with only a high school degree.

Banks doesn’t like to dwell on what his life would look like without Brown. He does, however, hope he can make sure others have the same opportunities.

“I know there’s a community of people out there who contributed and helped bring me here. As soon as I’m able to, I want to do the same and ensure that others will be able to have the same opportunities and benefits that I’ve had,” he says.

Support Brown where it’s most needed.

With your gift to the Brown Annual Fund, you’re making the Brown experience possible for students like Teidrick.

The vision and generosity behind Brown’s new LGBTQ+ Center

January 24, 2023
As the immediate past president and longtime volunteer for the Inman Page Black Alumni Council, Eldridge H. Gilbert III has harnessed the power of alumni volunteers to welcome the newest generation of Brunonians.
Read Article
Alumni & Friends

January 24, 2023
From Rhode Island to Texas to Guatemala, one thing remains constant for Martinez: his conviction to give back to those around him.
Read Article