From Vermont farm boy to retired naval officer and engineer, Richard Edgar reflects on the role Brown has played in his life — and how he pays it forward. 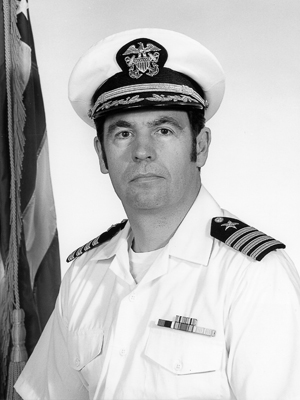 There were few male civilian students on campus when Richard Edgar ’47 first came to Brown in 1944. The need for troops during World War II had drastically reduced the number of incoming college cohorts, as droves of college-aged men enlisted or were drafted. Edgar was among those eager to do their part in the war effort. At 17, he qualified for the V-12 Navy College Training Program, which paid tuition for future officers to receive a college degree while training.

The engineering degree he earned at Brown launched him into a rewarding career, working for the likes of General Electric and Boeing. Concurrently, Edgar continued to serve his country through his 38-year-long naval career, where he was able to put his engineering expertise and experience into practice.

Grateful for what his Brown education helped make possible, Edgar has been a Brown Annual Fund supporter for more than 60 years and recently made a bequest to support the School of Engineering.

I had never heard of Brown before I opened the Navy letter that ordered me to report for active duty at the Brown University V-12 Unit on July 1, 1944. My mother had. She said it was a good college. It seemed so improbable that a 17-year-old farm boy from Vermont could go to such a prestigious school with essentially no cost to me or my family, graduate with honors and a naval commission in three years, and then go on to pursue a rewarding engineering career while serving in the Naval Reserve for 38 years. I am forever grateful to the institutions that allowed me to do that.

Who or what helped you get to where you are now?

Wow, there is a lot to credit. First: loving, tolerant parents that let me choose my own way and supported me in every way they could. Second, my eighth-grade teacher who, despite having eight grades to teach in a one-room schoolhouse, was everything a teacher should be: warm, passionate about teaching, immensely informed about the subject matter, and personally interested in the child’s learning — not only me, but all 20 of us. Third, my Brown degree — made possible by the V-12 Program.

How has your Brown education influenced and informed your career?

To get a decent job in engineering, a bachelor’s degree was and is essential. The electrical engineering concentration was useful at General Electric, particularly when I was learning the technical details of the Mark 56 Gunfire Control System, which I would later oversee as a fire control officer when I began active duty aboard the battleship USS New Jersey (BB-62) in 1954. My experience at Brown was so wrapped up in the Navy that it is hard to isolate the two. Combined, they both sent me on my way.

What is happening at Brown today that excites you?

I think it's the cutting-edge research as reported in the Brown Engineering quarterly magazine and Research at Brown’s Impact magazine. In fact, I want my testamentary gift to support climate research at Brown.

Why do you support Brown?

I felt a duty to give back to society in some way, and Brown in particular, because of the unusual opportunity I had to receive a college education and an engineering degree from such a prestigious university. It opened the way to my career, for which I am ever thankful. I give back to Brown not only out of gratitude, but also because I believe in its work and mission. I set up a bequest that will support graduate or post-doctoral research at the School of Engineering, with a preference for climate change mitigation-related research.

Interested in making a bequest or other planned gift to Brown? Learn more by contacting the Office of Philanthropic Strategies & Planned Giving or visiting their website.

WATCH | “The State of American Democracy” with Professor Wendy Schiller

November 18, 2022
Is democracy on the decline, or stronger than ever? Watch as the distinguished professor of political science illuminates the state of politics in our country
Read Article
Alumni & Friends

November 16, 2022
Throughout his career and during his time at Brown, Jarvis Sam (he/him/his) has been on a journey of self-discovery. But in his pursuit of finding his authentic self — there is no finish line.
Read Article